Traveling across the southwest and into parts of California, it’s not unusual for us to either find some of artist Ted DeGrazia’s work or to meet someone with a DeGrazia story. Well it happened again in the museum at Casa Grande Ruins National Monument where we saw the DeGrazia painting, “Padre Kino at Casa Grande.”

Famed Arizona artist Ted DeGrazia, most likely the most reproduced artist in the world, is known for his art and paintings that trace historical events and native cultures of the Southwest. DeGrazia was inspired by the memorable events in the life and times of Father Eusebio Kino. Since childhood, DeGrazia admired Padre Kino for his education, life of adventure and his respect for Native Americans. DeGrazia traveled to every Kino mission as he lovingly studied the life of his favorite Jesuit priest.


Located in Coolidge, just 1 ½ hours west of Tucson in Southern Arizona, Casa Grande Ruins National Monument is an historic site that features the fascinating and mysterious ruins of an ancient Sonoran Desert People’s farming community. Here you can view the ruins of the impressive ‘Great House,’ and  what was once an extensive system of irrigation canals.

Father Eusebio Kino was the first European to see and document the site in 1694. In fact, he was the one who named the site Casa Grande. In 1775, Juan Bautista de Anza documented Casa Grande, when the expedition stopped and camped about 5 miles northwest from the site. Anza and Father Font visited the ruins to check Father Kino’s prior descriptions and measurements.

The first archaeological preserve in America, these ruins were integral to the creation of the Antiquities Act which gives the President power to set aside valuable public natural and historic areas as park and conservation land. President Woodrow Wilson proclaimed Casa Grande Ruins to be a National Monument on August 3, 1918, and the site was added to the National Register of Historic Places on October 15, 1966. This historic site is also a main destination on the Juan Bautista de Anza National Historic Trail. Learn more about Casa Grande Runs National Monument at www.NPS.gov/cagr

DeGrazia Gallery in the Sun is a 10-acre historic landmark nestled in the foothills of the Santa Catalina Mountains in Tucson, Arizona. Opened in 1965, it is home to over 15,000 originals of Ted DeGrazia art pieces including oil paintings, watercolors, ceramics and sculptures. There are six permanent collections on display including, “DeGrazia and Padre Kino.” You can learn more about the Gallery and Ted DeGrazia’s work at www.DeGRazia.org. 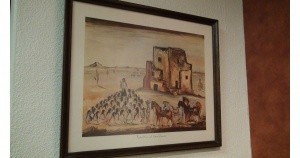